The Department of Elementary and Secondary Education intends to submit their plan for implementation of ESSA to the Board at their March meeting, with submission to the federal government at their earliest due date in April. This would allow for a response by the U.S. DoE prior to the beginning of the next school year, such that districts would know the direction intended in implementation.

The intent is to focus primarily on early literacy, middle school mathematics, and historically disadvantaged groups. As there was broad support across the state during public input sessions for a focus on social-emotional learning, school climate, and student access to a broad curriculum (specifically including arts), those are incorporated as well.

The state is required under ESSA to continue annual assessment with a 95% participation rate. It is also required to annually "meaningfully differentiate" among schools, identifying those at most need for additional support. The ESSA plan must establish long-term goals and means of measuring progress, with a focus on the performance of subgroups and on gap closing.

Accountability under ESSA must continue to use achievement on ELA, math, and science assessments and graduation rates for high schools, but it also must include growth for elementary and middle school students, progress towards proficiency in English for ELL students, and at least one additional measure.

What the Department proposes is as follows: 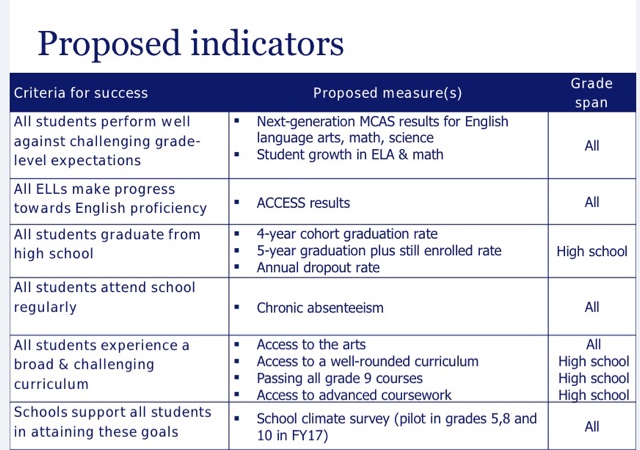 Those indicators would then be sorted as follows for calculating accountability measures (to ensure the weighting of high needs students): 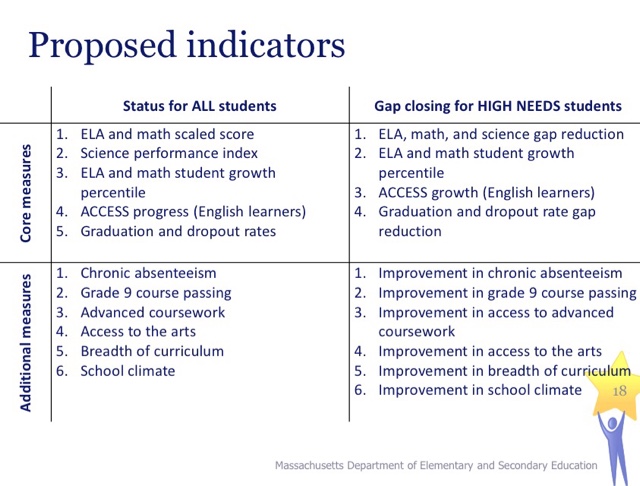 On Monday night, the Department told the Board that they intend to request that the Board "reset" accountability levels this spring, due to the new state test and the proposed revamped accountability system. Under this plan, all grade 3-8 schools would have no accountability level issued for the spring 2017 test, so long as they met participation requirements of 95% (schools that did not would be Level 3). High schools (as they are testing under the legacy MCAS) would remain under the current system. All schools and districts would have new, reset levels coming out of spring 2018 testing and evaluation.

The Commissioner emphasized that much of the above remained conceptual until there was data to enter for each section (true not only of the new test, but also of evaluation under the new indicators). The Department also indicated that they were allowed to "signal growth" in the plan, being that the above could evolve as more information, better data collection, or the like became available.

Secretary Peyser was concerned, as during the last report, about overpromising in the state's plan. He also was clearly uncomfortable with nearly all of the additional measures, expressing skepticism of the state's ability to measure them, and in some cases with the importance of doing so. Chair Sagan joined these concerns, adding further his concern around measuring growth in ELL students, wanting them to be held to an absolute standard. (Note that the growth measure here is written into the federal law.) Noyce echoed this concern, with Peyser further contributing that five years to language proficiency "seems way too long." Craven noted that an accountability evaluation under this system would look very different than the current evaluation.

Before the discussion on Tuesday, there was public testimony in favor of arts being included, and testifying to the importance of social-emotional measures. The Board was also offered methods of evaluating the inclusion of arts. Stewart encouraged the department to "be very bold" on the inclusion of arts education, with Peyser again expressing skepticism particularly on the question of quality. Noyce commented that while there was a difference between a bad art class and a good one, there was an even bigger difference between a bad art class and no art class. Stewart suggested using "missed days of instruction" instead of chronic absenteeism. There was also a general discussion of the wisdom of the 9th grade passing measure, with concern expressed that students might get passed along.

The Department on Tuesday further described what they saw accountability looking like; as 80% of schools are now Level 1 or 2, they propose instead a system by percentage (with all schools in a list). It is proposed as follows:

Note that the Department does continue to collect feedback, and that they propose to have a draft plan out for public comment prior to the March meeting.